At the outbreak of the Second World War, the regiment furnished 20 officers and 125 other ranks to other units before its own mobilisation in 1940 when, as 1st Battalion, The Canadian Grenadier Guards, it reached full strength in three weeks. It trained first on St. Helen's Island in Montreal, moved subsequently to Camps Borden and Valcartier, garrisoned the Halifax citadel, was stationed in Saint John, New Brunswick, and trained in Sussex, New Brunswick and Debert, Nova Scotia. On 5 February 1942, the First Battalion became 22nd Canadian Armoured Regiment (CGG), a unit of 4th Canadian Armoured Division which included 21st Canadian Armoured Regiment GGFG. In September, proudly wearing the black beret of the Armoured Corps, 22 CAR moved to England where it would continue to train in a number of areas until deployed to Normandy on 21 July 1944. From that time until VE Day on 8 May 1945, 22 CAR fought throughout the battles around Falaise, the move into Belgium and the Netherlands and finally across the Rhine, earning 12 Honorary Distinctions. 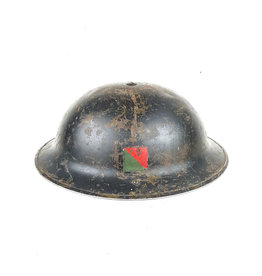 Untouched Canadian helmet with decal to the Royal CanadianArmy Service Corps. The helmet has never been cleaned! The decal is in perfect condition.
Add to cart
Canadian Helmet RCASC
€350,00
Please accept cookies to help us improve this website Is this OK? Yes No More on cookies »