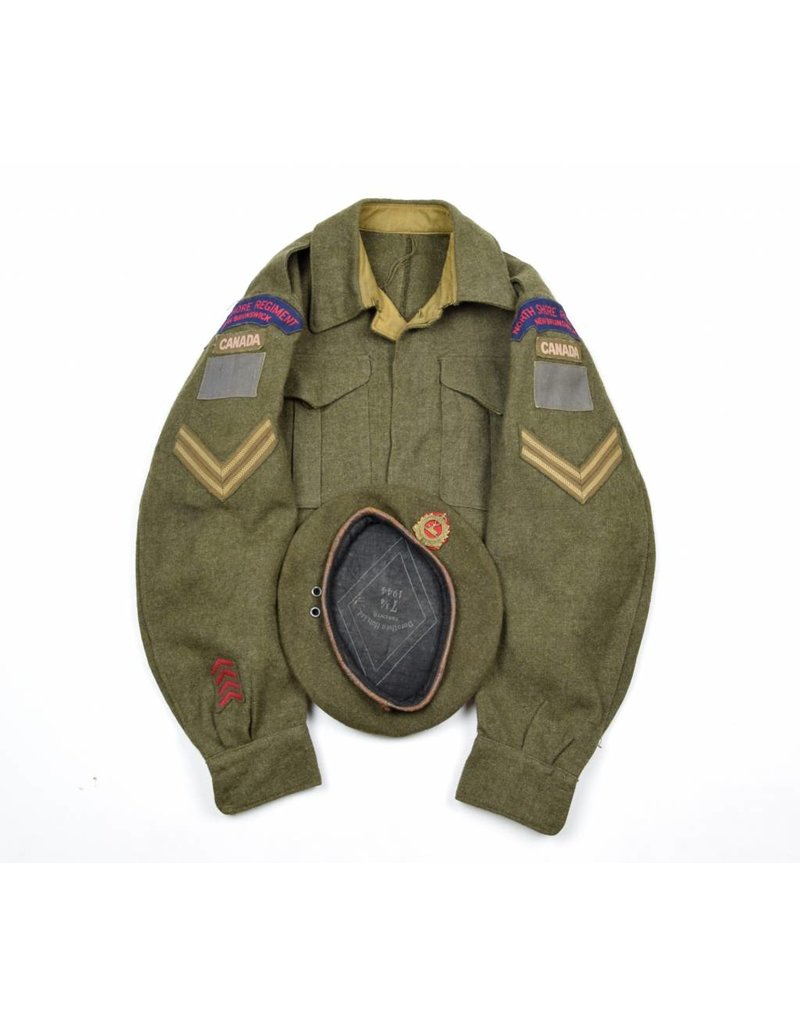 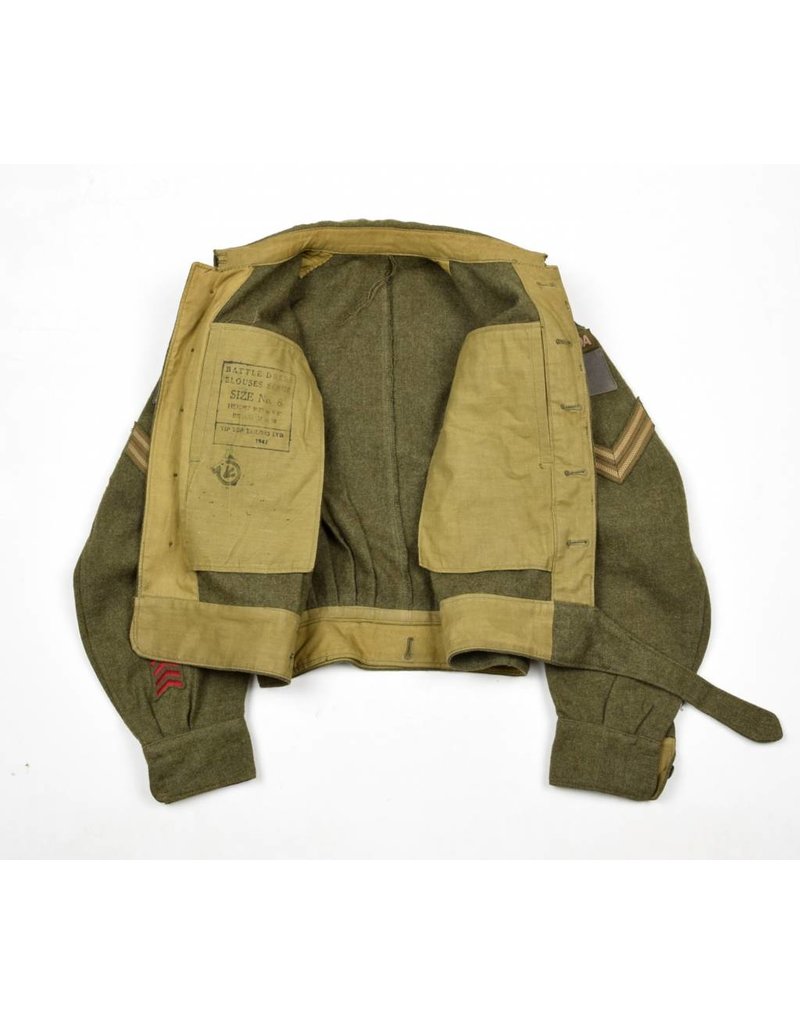 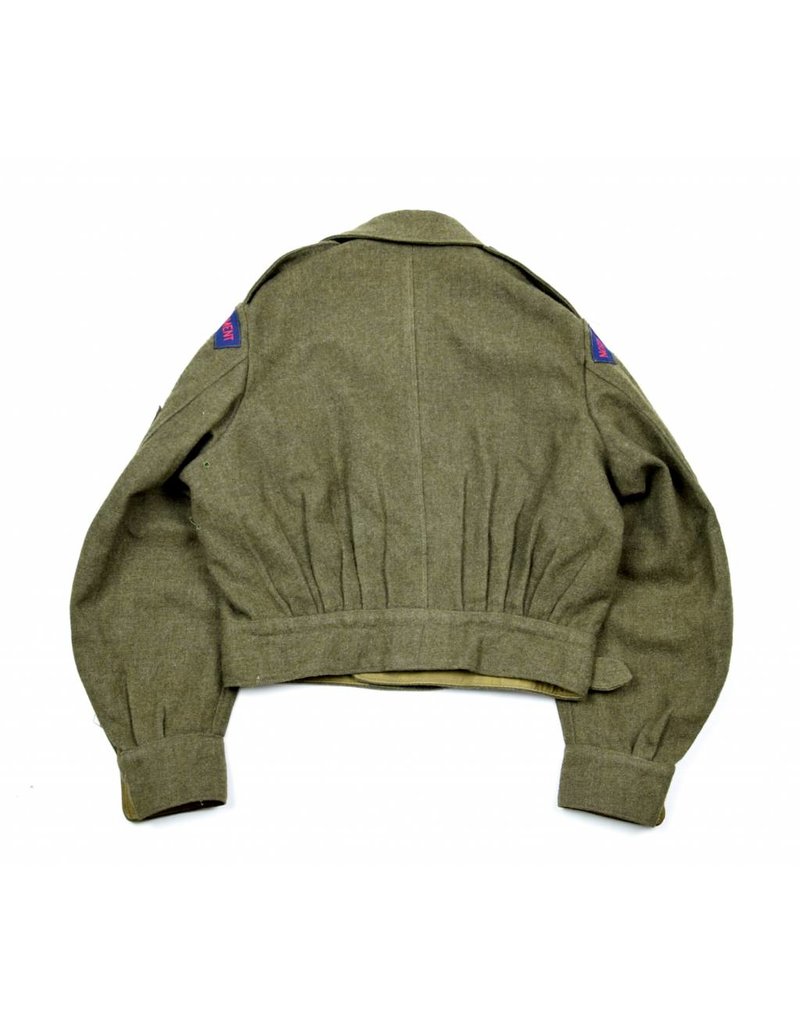 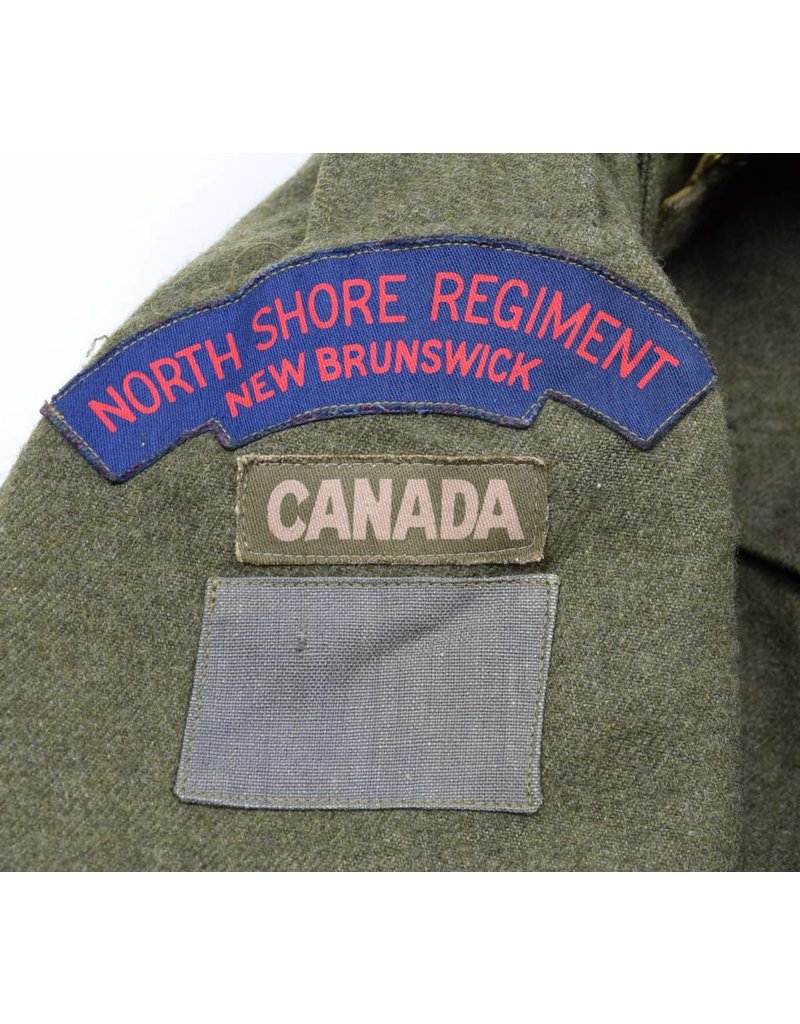 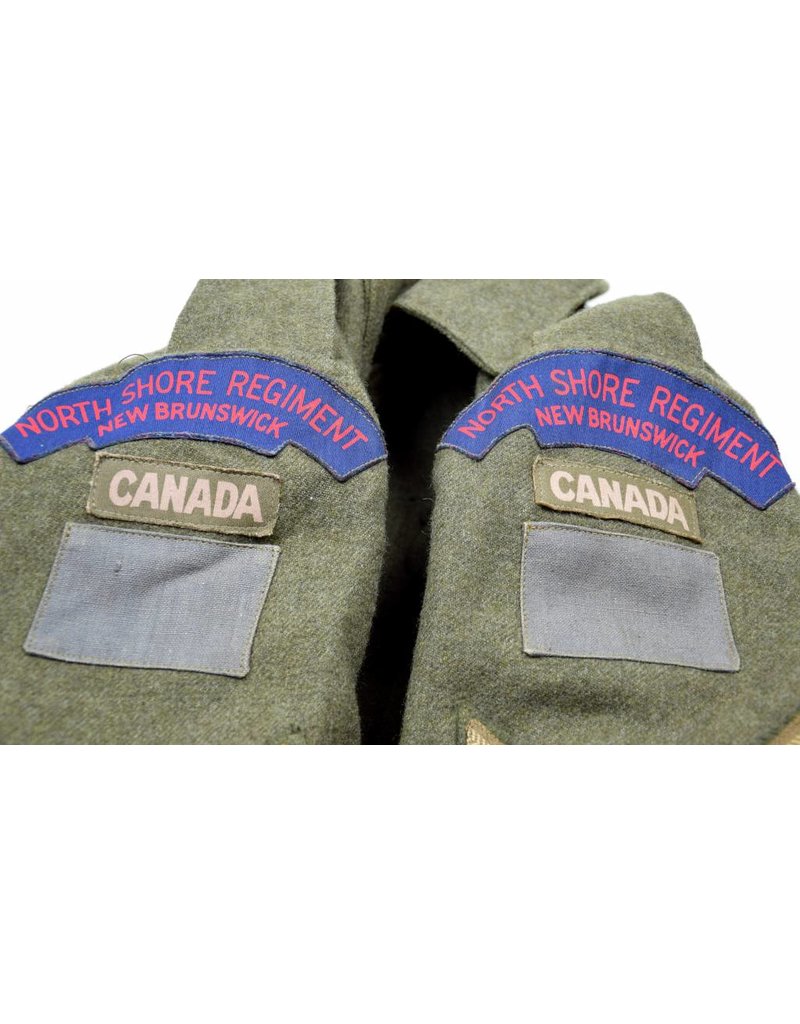 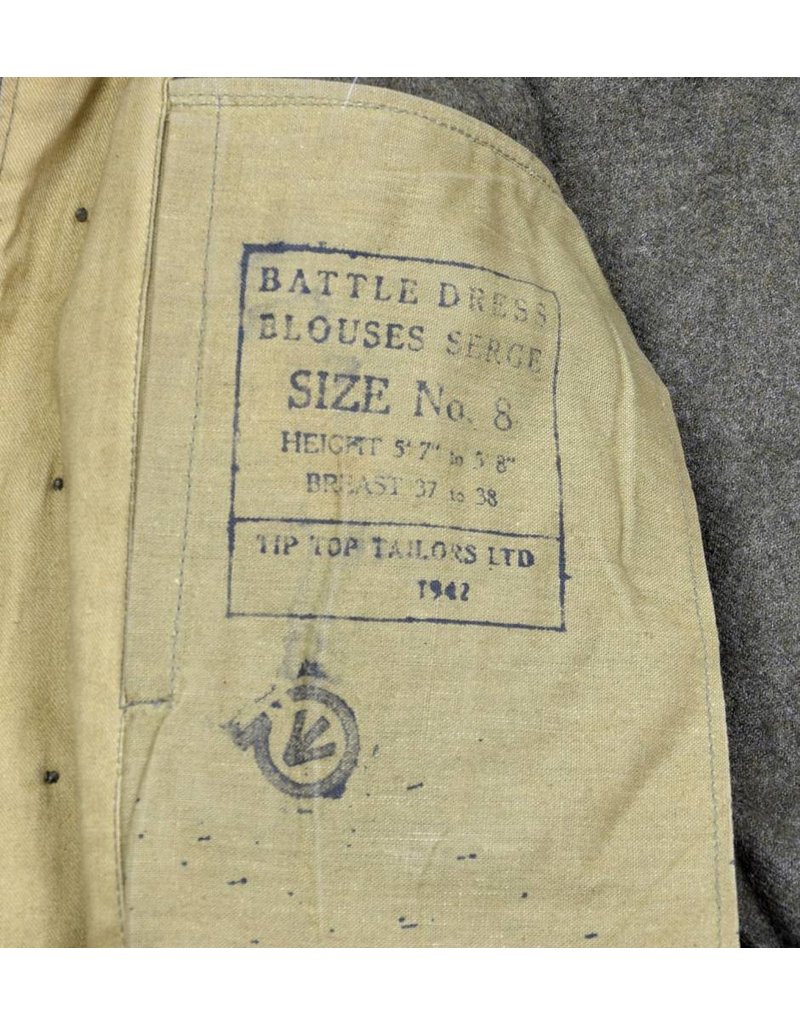 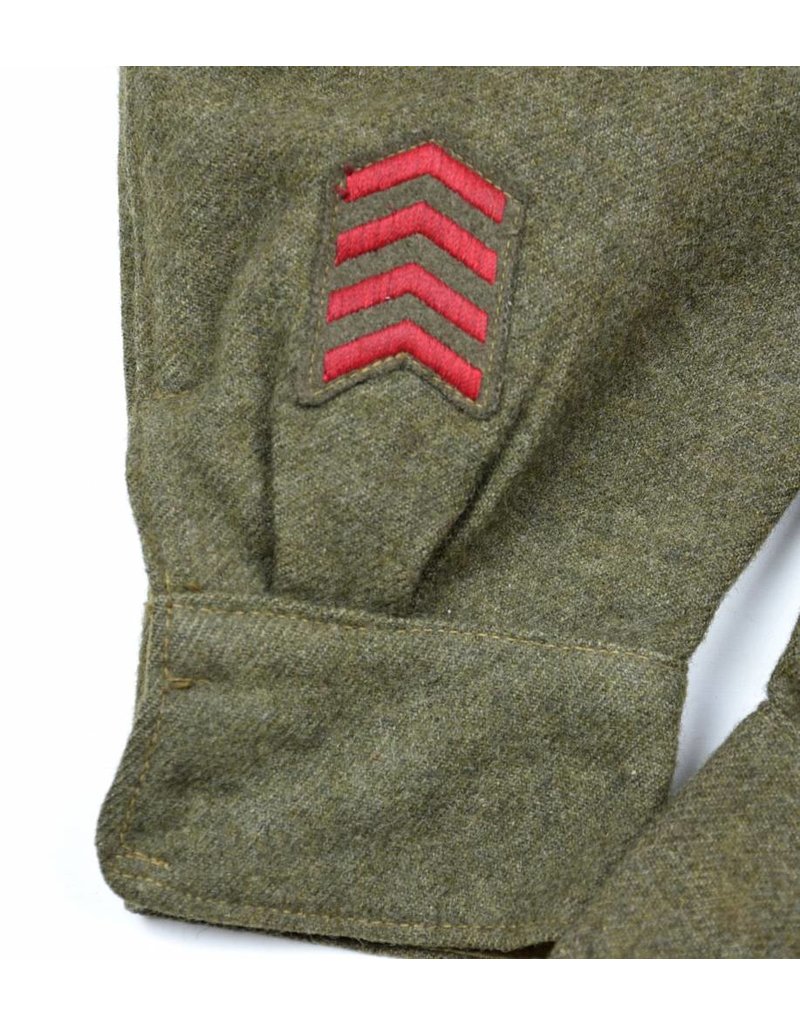 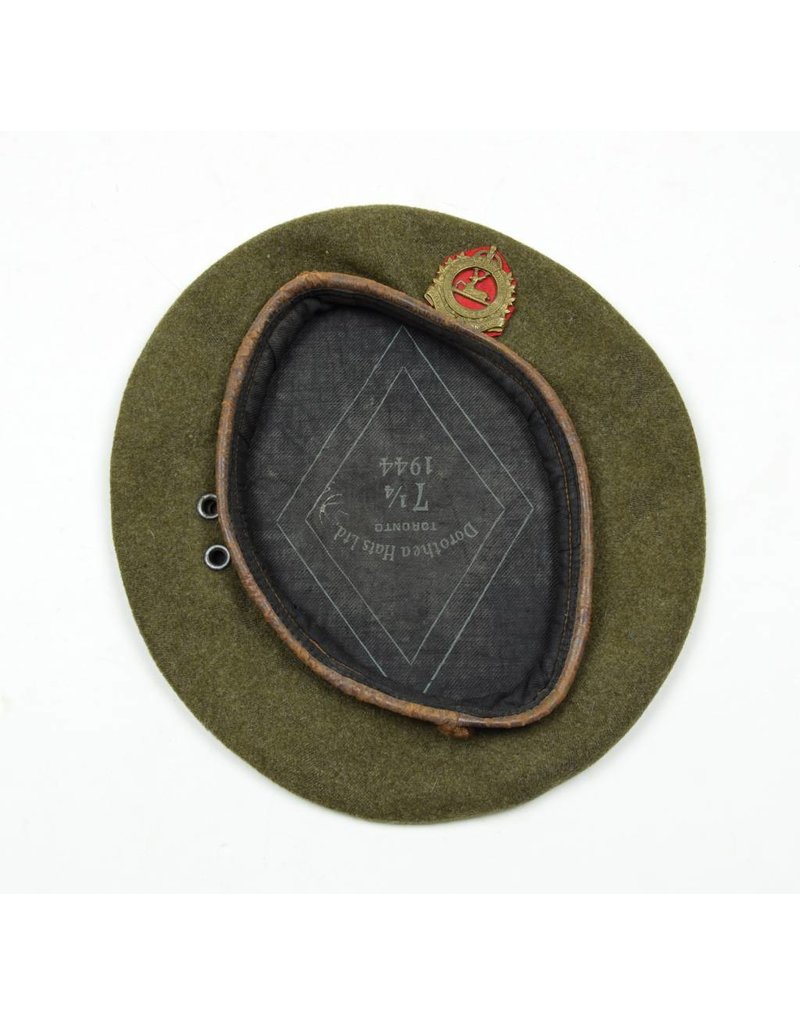 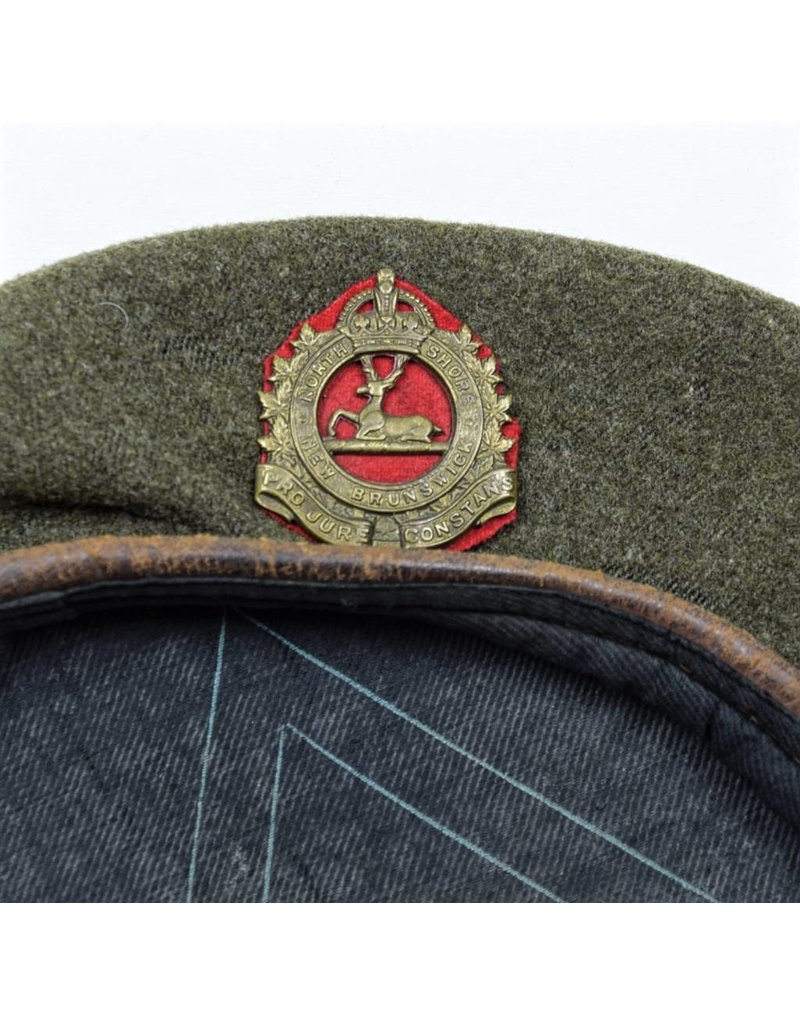 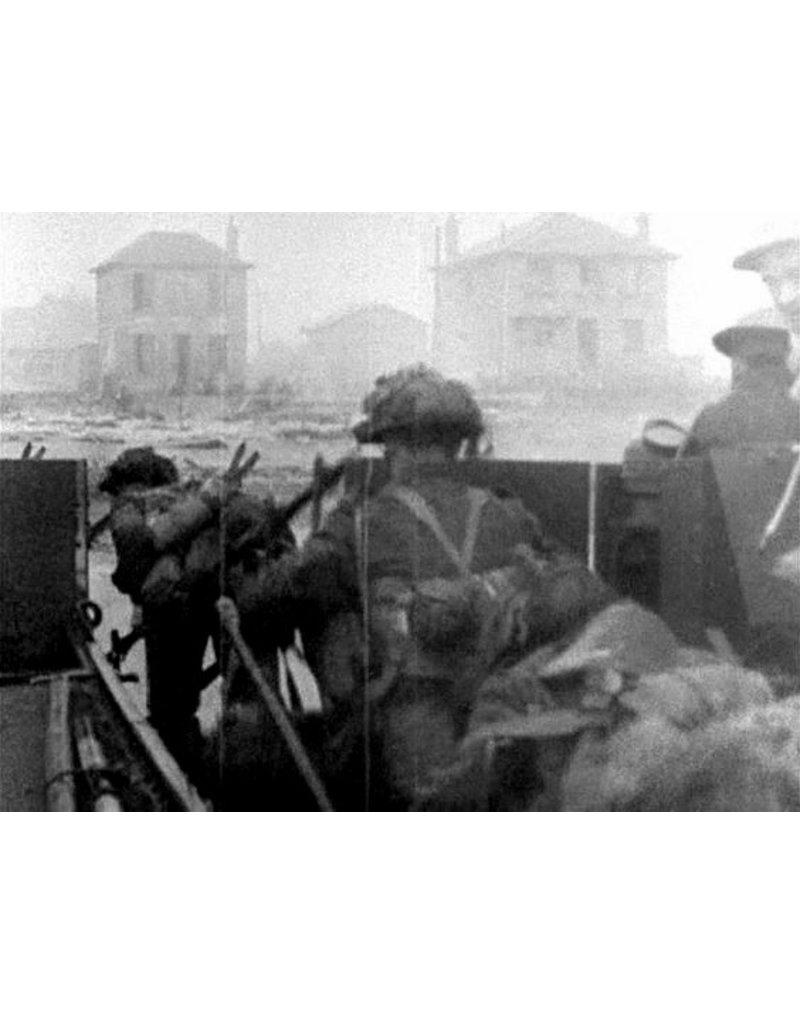 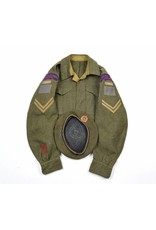 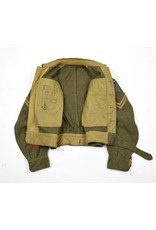 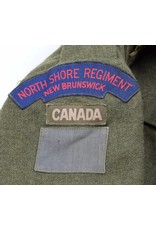 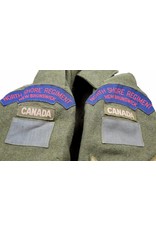 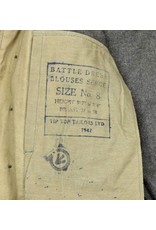 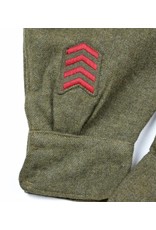 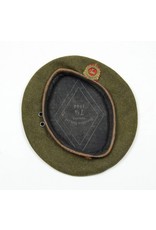 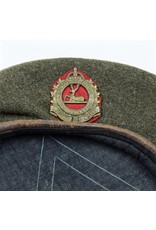 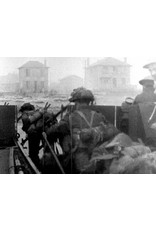 This is an original battledress with beret to a Corporal in the North Shore Regiment - 3rd Canadian Infantry Division. The tunic is in good condition. The tunic bears printed/canvas shoulder titles, CANADA titles and division patches. Embroidered Corporal chevrons and four years overseas stripes. Nicely maker marked by Tip Top Tailors, dated 1942 with size 8. The shoulder boards having the early brown chocolate coloured buttons. The beret is in good condition with its original capbadge with backing, maker marked and dated 1944. The North Shore Regiment took part in the first wave on D-Day June 6th 1944. Newsreel footage of the North Shore Regiment landing under fire taken by the Canadian Army Film and Photo Unit became one of the most-used film depiction's of the Allied D-Day landing.

Details of The North Shore (New Brunswick) Regiment were called out on service on 26 August 1939 and then placed on active service on 1 September 1939 as The North Shore (New Brunswick) Regiment for local protection duties. The details called out on active service were subsequently disbanded on 31 December 1940.

The regiment mobilized The North Shore (New Brunswick) Regiment, CASF for active service on 24 May 1940. It was redesignated as the 1st Battalion, The North Shore (New Brunswick) Regiment, CASF on 7 November 1940. It embarked for Great Britain on 18 July 1941. On D-Day, 6 June 1944, it landed on JUNO Beach in Normandy, France, as part of the 8th Infantry Brigade, 3rd Canadian Infantry Division, and it continued to fight in North-West Europe until the end of the war.

During the Second World War, the regiment was first stationed in Woodstock, New Brunswick and then Sussex, New Brunswick. When it shipped overseas, it was initially stationed in Liverpool, after that it moved to Scotland near the castle of the Duke of Argyll.

On June 6, 1944, the regiment participated in the landing on Juno Beach, landing on Nan Red sector and losing nearly 50 men. On June 10, it liberated the town of Saint-Aubin-sur-Mer, Calvados. Newsreel footage of the North Shore Regiment landing under fire taken by the Canadian Army Film and Photo Unit became one of the most-used film depiction's of the Allied D-Day landing.

On July 4, 1944, the men of the North Shore Regiment participated in Operation Windsor, the attack on the Carpiquet airfield. It lost nearly 130 men, and it was later known by the regiment's chaplain as the "graveyard of the regiment". The regiment later fought in Caen and all through France, continuously advancing with the 8th Canadian Infantry Brigade. It fought in places like Ranville, Bourguebus Ridge, Falaise, Quesnay Wood, the Laison and Chambois.

It helped clear the coast of France in late August and early September 1944, then it advanced into the Netherlands, taking part in the Battle of the Scheldt. It fought in Breskens Pocket in flooded fields and harsh conditions. After the Scheldt, it moved onto the rest of the Netherlands, fighting near the Bergsche Maas River at Kapelsche Veer.

In February 1945, it moved into Germany via amphibious landing. It fought in the Rhineland, the Hochwald, but then it doubled-back to the Netherlands and conquered the Twente Canal, and liberated Zutphen where it met its most brutal urban fighting since Caen. It then moved back into Germany in April, and it ended the war on German soil.

A rare uniform set to the North Shore Regiment!! 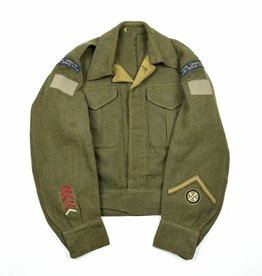